Will Sobeys Smart Carts change the way we shop? Dal professor weighs in

The carts use artificial intelligence, which basically acts as a customer's personal shopping assistant
0
Oct 28, 2019 11:29 AM By: Meghan Groff 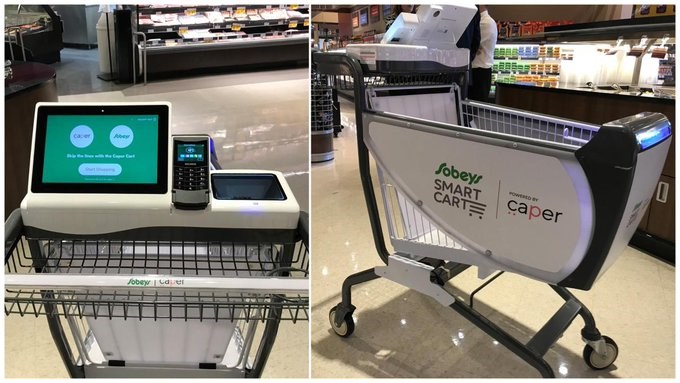 Stellarton-based Sobeys has launched a pilot project that could change the way we shop.

The grocer has partnered with an American company called Caper to add 10 Smart Carts to a store in Oakville, Ontario.

The carts use artificial intelligence (AI), which basically acts as a customer's personal shopping assistant.

They use high-resolution cameras to identify each item as it's placed in the cart. This allows the carts to weigh produce and give people a running total as they shop. When customers are finished, they can pay through the cart, so they don't have to wait in line to be rang up by a cashier.

Each cart has a screen that can suggest recipes, display flyer sales and is equipped with GPS so users can quickly find products on their shopping list.

One Dalhousie University researcher plans to keep a close eye on the experiment.

Dr. Sylvain Charlebois, the director of the school's Agri-food Analytics Lab, said this is about more than just customer convenience.

"For Sobeys, in particular, it's really about data and understanding consumer psychology," he explained. "That data will allow them to better understand how we shop, and also how to better manage inventories."

Charlebois said the store could also benefit from getting customers in and out the door more quickly, but one factor will determine if the pilot project gets expanded.

"You've got to make money," he said. "If you don't make money by providing more convenience, it means you'll increase your cost to operate a grocery store."

Even though Smart Carts could reduce or eliminate the need for cashiers, Charlebois said if this technology takes off, it may not necessarily mean fewer employees overall.

"My belief is you may actually see the same number of employees working for Sobeys or other grocers, but they'll have different jobs, and the skillsets required will also be different."

Sobeys Vice President, Retail Support, Mathieu Lacoursiere, told 680 NEWS/CityNews they don't plan to eliminate jobs. He said the technology will free up employees to spend more time on the floor interacting with shoppers.

This isn't the only AI experiment in the grocery business. In the U.S., Amazon plans to open as many as 3,000 new AmazonGo cashier-less stores over the next few years.

Customers scan an app on their phones on the way into the store, grab what they want, then go. The technology automatically detects what they've taken off the shelves, and charges their Amazon account when they leave.

"The problem with AmazonGo is you have to spend millions of dollars in infrastructure to install sensors everywhere, millions of sensors in the grocery store," he said. "With a Smart Cart, you don't have to do that."

However, Charlebois said it remains to be seen if customers will accept the new technology and if the electronics in the carts can survive a harsh Canadian winter.

Exclusive first look at Sobeys new Smart Cart. Its a self checkout on wheels. Scan items and pay with debit or credit on the cart without waiting in line. It has a built in scale & displays store specials. More on @680NEWS & @CityNews pic.twitter.com/wABEj1Qi4e

About the Author: Meghan Groff

Born in Michigan, raised in Ontario, schooled in Indiana & lives in Nova Scotia; Meghan is the community editor for HalifaxToday.ca.
Read more

This has been shared 0 times

Halifax man charged with sexual offences against a child
Mar 31, 2020 3:28 PM
Comments
We welcome your feedback and encourage you to share your thoughts on this story. We ask that you be respectful of others and their points of view, refrain from personal attacks and stay on topic. To learn about our commenting policies and how we moderate, please read our Community Guidelines.